Young talent at Wall Street’s investment banks are feeling burnt out and disenchanted with the profession, some recruiters and industry execs fear. Samantha Lee/Insider 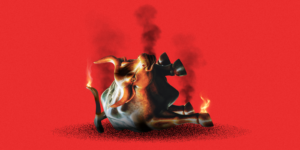 Declining coronavirus case counts and plans to ramp up America’s vaccine distribution have some on Wall Street hopeful the end of the pandemic is less a mirage and more a finish line that’s drawing nearer.

But as we approach the one-year anniversary of when US investment banks began sending employees home, Wall Street bosses are fearing the protracted nature of remote work is disenchanting some young employees from pursuing long-term careers in the industry.

In recent months, top execs including Goldman Sachs CEO David Solomon and JPMorgan Chase CEO Jamie Dimon have expressed concern about the prolonged effect of remote work on their junior ranks and are pressing to get staff back to the office.

But, with both Morgan Stanley and Wells Fargo notifying incoming classes of summer interns they’ll be starting their internships remote, that bullishness for getting back to the office may be undercut by the realities of the pandemic.

Meanwhile, investment-banking revenues at the top banks increased 23% to $49.4 billion, according to Coalition, but headcount to handle the additional workload didn’t grow correspondingly. Front-office staffing was flat compared to 2019 and revenue per full-time employee increased to $2.9 million, a 23% uptick.

Just this week a client told him an associate hired last February had already resigned. Meanwhile, a VP at a top-tier investment bank also resigned this week to join a private-equity firm, and was fielding calls from a handful of buyout competitors and investment banks hoping to convince him to interview before officially starting the new gig, Mahoney said.

While they don’t make headlines and bring in elephant deals, reliable junior and mid-level staffers are a boon to investment banks, as they’re depended on to shoulder the grunt work in executing transactions — and they come at a fraction of the cost of managing directors or partners.

Plus, they’re expected to shoulder the grunt of 80-hour workweeks and infamously late nights at the office — though the realities of reconciling with those demands while at home present their own set of challenges.

But despite signs of burnout, poaching from this coveted talent pool has also been challenging by and large. The working conditions that are fraying edges are simultaneously creating roadblocks for jumping ship.

An energetic market for deals has kept junior bankers busy thanks to a record numbers of SPAC IPOs and strong M&A activity right out of the gate for 2021.

“Everyone is in the market for associates from what it seems, but they simply don’t have the time to even take phone calls and explore outside opportunities. This is the case in banking and private credit, too,” Mahoney told Insider. “Vice-president level candidates are similarly feeling the strain.”

Even the young bankers that are coping with the workload are nonetheless feeling disconnected, as they’ve spent a large chunk, if not all of the time in their role, without any in-person camaraderie.

For junior bankers, there’s the obvious neglect in hands-on training and mentorship to worry about, but there’s also the more disconcerting, ineffable feeling of not actually having done the job despite all the arduous work over the past year.

“Many feel as though they really haven’t done the actual job they’re supposed to be doing, as part of a team, yet. As a result, many want to wait it out to see what it’ll feel like when they are back in the team environment before deciding if it’s a fit for them,” Mahoney said. “In other words, how do you quit a job that you don’t feel like you’ve actually even started doing yet?”

Parents are adding pressure, and there are few valves to let off some of the steam

During the pandemic, bankers have had fewer options at their disposal for cashing in on the exhaustive hours and grueling schedules that they pull.

For instance, lavish dinners on the town and luxurious vacations when time allowed are largely out of the question, replaced by the nonstop monotony of continuous work.

“The things that ease the blow — that assuage that pain of you losing the best years of your life — you couldn’t have, so you’re just working and you’re putting money into your current account every month,” said Logan Naidu, the London-based founder and CEO of the search firm Dartmouth Partners.

Work from home, for many junior bankers, doesn’t amount to being able to work on deals from the comfort of their beds. For many, it has put them in proximity of their parents, many of whom are struggling to reconcile with bankers’ long and exhaustive hours, and the toll that such arduous demands can inflict upon their kids.

“Parents operate at a different speed than you do when you’re in New York and you’re in the center of the universe,” said Chicago-based recruiter Julie Kanak of Diversified Search Group.

“It’s two different worlds. And they’re being brought together and they’re colliding in that bedroom in Kentucky,” she added, speaking metaphorically.

“The analyst worries that if they don’t deliver to the New York expectations, they’re going to be fired,” Kanak said. “And, at the same time, they’ve got mom and dad saying, ‘Why are you doing this to yourself?'”

Anthony Keizner, the New York-based managing partner at the search firm Odyssey Search Partners, said that it’s not all been dismal. In fact, the experience for some analysts has, in some cases, yielded some unexpected benefits.

One knock-on effect of the pandemic has been that the private-equity recruiting timetable has been pushed back, meaning that the industry’s hawkish PE recruiters, who recruit on behalf of some of the industry’s most premiere funds, have decided to back off somewhat. That’s given investment-banking rookies time to breathe before receiving offers to interview for competitive private-equity jobs.

That’s largely been a reflection of the recruiters’ collective belief that junior investment-bankers may very well not be ready for a transition to the buy-side at this point, given their relatively limited experience, most if not all of it being remote.

And that concern might, in a roundabout way, be giving some analysts the chance to get their feet wet on more deals, while the PE hiring cycle remains in limbo.

“The traditional hiring cycle — private-equity, the golden pot at the end of the rainbow — has not yet become available,” Keizner said.

That’s leaving some analysts who are hoping to exit investment-banking as soon as possible willing to hold off until the recruiting cycle begins.

Some are “waiting for that before they would consider another move in their career. So in the meantime, to coin a phrase, they’re willing to suck it up,” he said.

“I wouldn’t go all the way to saying that everyone is disenchanted and everyone hates their job, they didn’t know what they were signing up for, and they want to run out of the industry,” Keizner added.

“We certainly have heard from people who have expressed the other point of view, which is that they have been able to focus on work without the distractions of recruiting and that deal flow in 2020-21 has been much better than in prior year, and they feel they are getting more deal experience than their peers in more recent years.”

It’s no secret Wall Street bosses are keen to get their younger talent back to the office, and fast.

“It’s an aberration that we’re going to correct as quickly as possible,” he said.

“This is not a new normal,” Solomon added, saying that the nature of remote work was in conflict with his firm’s “innovative, collaborative, apprenticeship culture.”

He made clear he wouldn’t want to see another round of the firm’s more than 2,000 interns “arriving at Goldman Sachs in the summer remotely,” which would deprive them of the firm’s “direct contact, direct apprenticeship, and direct mentorship.

He’s not alone in that assessment.

Dimon, the chief executive of JPMorgan Chase, shares some of Solomon’s views.

“Banks are basically an apprenticeship model where you learn by sitting next to people and going on a trip with them or seeing mistakes being made. Very often you need a lot of collaboration in the room,” he said, speaking at a Goldman Sachs virtual forum in December.

“You’re not going to learn that way by sitting at home,” he added.

Meanwhile, it seems like, at least in the short term, their hopes may be dashed.

The coronavirus pandemic remains a resilient foil to hopes that normal life can begin soon, and firms like Morgan Stanley and Wells Fargo have told their interns in recent weeks to expect to stay virtual for part or all of their summer internships.

The headhunters who spoke to Insider for this story shared a view that the impacts of remote work are a one-two punch for junior talent at the biggest players on the Street.

The experiences they’ve had working remotely has impacted their training of the tactical parts of their craft in addition to influencing how they feel about the profession as a whole.

Naidu, the London-based recruiter from Dartmouth Partners, said that the events of the past year are forcing junior bankers to prioritize what they really want for their futures, in a way that they might not have done in the past.

“It’s been a tough year,” he said. “Lots of people are asking the right existential questions around, ‘What am I doing with my life? Is it making me happy? Is it making me healthy? Is it worth sacrificing all these things to put money into my bank account?'”