The Game of Thrones final season is almost upon us, and as George RR Martin wrote, “nothing burns like the cold.” If you’re based in New York like us, you’ll recognize his words in the current cold winds. And wherever you are, if you’re associated with the hedge fund industry, you’re likely feeling the metaphoric chill blowing around you. Redemptions, big fund name closures and disappointments with year-end bonuses (more of that after our Q1 Comp survey) abound. Yet in other fields, talent markets are robust. Smart, qualified people are in high demand throughout public and private credit, private equity and structured equity (a “hot” area we delve into in this edition). As a result, we’re seeing the rise of more formalized talent programs, and the acceleration of recruiting deadlines. We tackle both these topics here.

In addition, for a bit of fun, we look at interviewing protocols – and some mishaps/disasters people have had on the way. Happy to engage further on any of these topics, compensation or 2019 hiring plans.

Early Bird Gets the Worm: Why Financial Services Recruitment Deadlines are Shifting Up

So what’s driving this extreme level of competition for early recruitment? How is it that firms seemed entirely comfortable with their hiring timeline up until a few years ago, when suddenly everything changed?

In our analysis, it’s largely the same factors as discussed driving the formation of Talent Management programs in the prior article.

a) Competition: Not merely in-industry competition, but Wall Street having to compete with Silicon Valley for star candidates, upping the pressure to secure top talent. With sizeable starting salaries, perks galore and tons of reputational cache, Silicon Valley Tech firms are tough to beat at recruitment. One way of doing so is by beating them to the punch, hence the push for earlier recruitment on the part of Wall Street.

b) Diversity: In order to make the push for diversity in candidates, especially women, this necessitates earlier entry into those (arguably) shallower waters.

c) LP pressure: As investors are increasingly looking at how firms are attracting and retaining talent, no-one wants to tell their LPs that they’re losing out on the cream of the talent crop just because they’re slower out of the gate than their competitors (and no-one would want to justify to their LPs such a horrid mixed metaphor.)

d) Technological facilitation or ‘ease of access’: Advances in the digital age have simplified firms’ ability to target candidates who might already be on the path to financial services, and scoop them up before they make themselves known through the declaration of a major or via summer internships. While the true impact is yet uncertain, recruiters argue that social media and AI technology enable them to highlight candidates who display a passion for finance, and reel them in before competitors are even aware of their interest in the space. 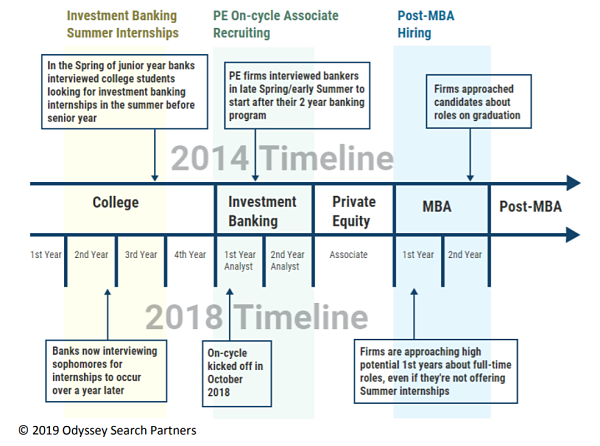