For the 3rd year in a row, we at Odyssey surveyed the incoming investment banking analyst class. These are the 2019 college grads who are now at bulge brackets (Goldman, Morgan Stanley, BAML, Citi, etc.) and major boutiques (Moelis, Evercore, etc.)

Below are key findings. First, the sample breakdown.

1. The growing reluctance to participate in on-cycle process

In 2017, 94% of participants said they were planning to take part in that year’s On-Cycle process*; this year, the equivalent number fell to 71% (this was the view expressed mid-September 2019, before any formal processes started).

What’s driving this? The process’ ever earlier start date has been putting bankers off. To use the words of one first year investment banking Analyst, “I’d only just hit the desk this year when I heard that KKR and Thoma Bravo had started interviewing bankers. I understand that last year it started in late October, and before that it was always in the following year. Frankly, I wasn’t prepared to put my best foot forward.”

*On-Cycle process refers to the recruiting of Investment Banking (IB) Analysts to investment jobs. It’s a process typically conducted by Private Equity firms, where offers are made to banking candidates to start PE Associate jobs after the completion of their IB Analyst programs. For this most recent class of 2019 grads now in IB, the On-Cycle process started 9/30/19, where job offers were for PE roles starting summer 2021.

For others it was less about being caught off-guard and more of a strategic decision. “I entered banking with a view to get into investing. I’m not sure if it’ll be credit or a hybrid strategy, but I want to wait at least a year before focusing on that, and I’ve heard that these firms tend to hire more for immediate starts.”

2. It’s women in particular who are holding back participation in on-cycle

In analyzing by gender those who said they weren’t planning to take part in On-Cycle, a significant discrepancy becomes apparent. While just 26% of men said they weren’t planning to interview in the On-Cycle process, a full 39% of women planned to sit out. This brings up a very interesting contradiction. While the increasingly early On-Cycle kick off date is largely driven by competition between large LBO and growth equity funds, this competition is actually making it harder to achieve increase diversity hiring, something most PE firms are looking to do. 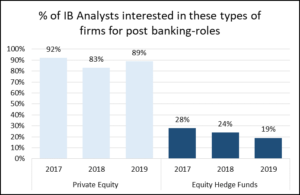 Note: Participants could express interest in more than one firm type.

4. Bigger is better: Preference for the larger, more well-known firms

Regardless of firm type, we wanted to see the reaction to something more entrepreneurial vs. something more established. As the following chart shows, the current crop of bankers is pretty risk averse. This is particularly true for female bankers, though the differences there are small.

The good news for business schools is that while there’s been a lot of press about the dwindling relevance of an MBA, the bankers in this survey who plan to pursue PE still view the degree as being important. For those who plan to complete their PE Associate program and then re-evaluate career options, the thought of skipping business school is becoming more commonplace. Finally, many fundamentally driven hedge funds would typically hire “Two by Twos” (PE Associates who come from investment banking analyst programs). The number of junior investment bankers planning on a PE position with this career route in mind is very small, and has been steadily decreasing over the past several years.

6. Change in perception of the Two-year commitment

As the following table shows, the ways bankers view their commitment has been changing. This might be partly due to some banks rethinking that banking analysts are on a “career track” rather than a strict “up or out” two (or three) year program. It might also reflect that bankers are increasingly willing to leave early for the right role. Or maybe the concept of corporate loyalty holds even less weight with this current batch of Gen Z graduates than it did with prior years of Millennial hires? That’s a stretch from these data points alone, but intriguing as a water-cooler discussion!

Early Bird Gets the Worm: Why Financial Services Recruitment Deadlines are Shifting Up

In our analysis, it’s largely the same factors as discussed driving the information of Talent Management programs in the prior article..